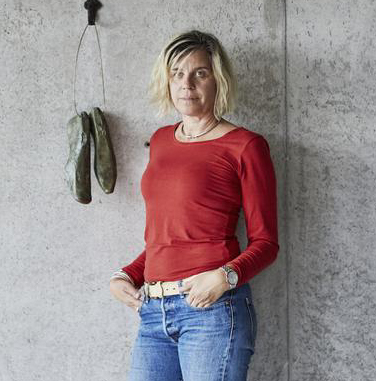 Cléa van der Grijn (b. 1967 Ireland) is a visual artist, film maker and writer based in Sligo. After graduating with first class honours from the National College of Art and Design Dublin, van der Grijn presented more than 25 solos exhibitions and 40 group shows nationally and internationally.
Van der Grijn, employs various media, including site-specific installation, experimental film, large format photography, collaborative projects, sculpture, drawing and painting.
She travels extensively and has lived in Italy and Mexico
with her young family, researching the relationship between emotional time and measured time, through the culture of death. RECONSTRUCTING MEMORY was presented as a major experiential installation and film for The Model, Sligo, in 2016.
In 2017 it was exhibited in the Limerick City Gallery, Ireland and the Rochester Museum Minnesota, USA. Van der Grijn’s international award winning film JUMP (2018), has been screened nationally and internationally, having its cinematic premier in Amsterdam at the ARFF where it was a best cinematography finalist.(2019) JUMP’S USA premier was held in New York at the International New York Film Festival, (2019) winning best experimental film as well as being selected to screen at the prestigious Oaxaca Film fest. The JUMP project (film/neon/architectural POD + paintings) toured Ireland
for 9 months consecutively in five venues, 2018/19 and was made possible with a major Arts Council touring award and the support of Culture Ireland.